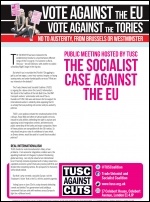 The Trade Unionist and Socialist Coalition (TUSC) has released the initial dates of a series of public meetings it is hosting in May and June under the heading 'The Socialist Case Against the EU'.

The EU debate has been reduced in the establishment media to a clash between different wings of the Tory party. It's Cameron vs Boris, they say - two old Etonians, with another ex-public schoolboy Nigel Farage in the ring too.

But what about if you're outside the 1% elite? Struggling to get by on low wages, a zero-hour contract maybe, or facing soaring rents and under-funded public services? What are our interests in the debate?

TUSC is arguing for a leave vote in the June EU referendum. We stand in the tradition of the late Bob Crow, the RMT transport workers' union leader and one of the co-founders of TUSC, who was well known for his support for international workers' solidarity while opposing the EU as a body that was pushing anti-worker and pro-austerity policies.

TUSC's core policies include the renationalisation of the railways, Royal Mail and other privatised public services, industries and utilities; defending the right to asylum and opposing racist immigration controls; and democratic public ownership of the banks and major companies. None of these policies are compatible with the EU treaties. So why should we give a vote of confidence to EU laws and institutions which, as Greece shows, would be used to try and block socialist policies?

TUSC stands for real internationalism. Many of our problems - from economic stagnation, endless wars, the appalling treatment of refugees, to planet-threatening global warming - can only be solved at an international level. If society remains organised as it is today, based on a capitalist economic system that puts private profit first and divided into competing nations, the prospects for humanity will be bleak indeed.

But that's why we need a socialist Europe, not the 'Employers' Union' that is the EU, with its austerity agenda.

Voting Leave on June 23rd is a step towards defeating a weak and divided Tory government and building a movement that can unite with workers across Europe to fight for a different world.

The response received to the recent TUSC campaign for the Electoral Commission not to give political authority and substantial taxpayers' resources to the Tory and UKIP-dominated Leave organisations (see http://www.tusc.org.uk/17197/30-03-2016/tusc-sends-formal-letter-to-election-watchdog-dont-back-ukip-amp-tory-eu-outers) confirmed the importance of conducting an independent working class socialist campaign for an exit vote.

We weren't able to convince the Electoral Commission but the backing received for our petition and the media coverage generated for what the BBC called our 'surprise bid' (see http://www.bbc.co.uk/news/uk-politics-eu-referendum-35941945) shows that a socialist case against the EU can get a hearing.

Now the TUSC national steering committee has agreed to organise a 'twenty-city tour' of TUSC-hosted meetings, with speakers from the TUSC constituent organisations - the RMT, the Socialist Party and the SWP - and other trade unions and socialist organisations that take a Leave position.

The following dates have been agreed for the tour so far:

Dave Nellist, the chair of TUSC, was a Labour MP until 1992. Dave was first elected to parliament in 1983 on a Labour Party manifesto that called for exit from the EU, then the European Economic Community.

He says: "The experiences of workers in countries like Greece make it even more clear than it was in 1983 that the EU is an employers' union, acting in the interests of big business against the working class.

"I campaigned in the past alongside labour movement leaders like Tony Benn and Bob Crow against the EU and I'm proud that TUSC is carrying on that struggle today".