July 2014. The East London Save Our Surgeries campaign lobby Hackney council, supported by the local TUSC branch   (Click to enlarge)

Local Trade Unionist and Socialist Coalition (TUSC) groups haven't had too much time for a summer break this year, with campaigning continuing throughout July and August.

The decision of two city councillors to join with TUSC made the headlines in the Leicester Mercury (see http://www.leicestermercury.co.uk/Ex-Labour-councillors-join-anti-cuts-alliance/story-21444308-detail/story.html ). The paper reported that, in linking up with TUSC, Barbara Potter and Wayne Naylor "will take a firm stance against further budget reductions and will be pushing for the council to adopt a zero cuts budget in the future".

This provoked a typical reaction from the ruling Labour group that "it would be impossible to halt the cuts to services given reductions in grants from Whitehall". But that was completely different to the great response Barbara and Wayne received from public sector workers when they explained their anti-cuts stand at the July 10th strike Fair Pay Rally in Leicester.

The TUSC councillors in Southampton, Keith Morrell and Don Thomas, also made local news when Labour Party members tried to distort their vote at a recent council meeting to imply that they opposed a living wage!

Keith and Don replied immediately, issuing a statement that was circulated to the city council branch secretaries of the Unison, Unite and the GMB unions:

"At yesterday's council meeting [16th July] you will be aware that the report to be voted upon by councillors included the following recommendation, empowering the council to:

"We were not prepared to vote to give the council the power to dismiss staff if the outcome of the trades unions' ballot of members was to reject the council's proposed changes. The last time this power was deployed was in 2010/11 when the previous Conservative administration used it to try to force through a cut in staff pay. For Labour councillors to vote to put in place such powers is shameful.

"We were not voting against the living wage and equal pay proposals - for anyone to suggest we were is patently ridiculous, given our well-known and very public commitment to the trade union movement.

"It should be noted that, earlier in the meeting, we spoke and voted against the Labour Group's proposal to reduce the workforce by two hundred".

Labour councillors can twist and turn but the truth will out - they have a choice not to act as the local agents of Con-Dem austerity, but they won't. 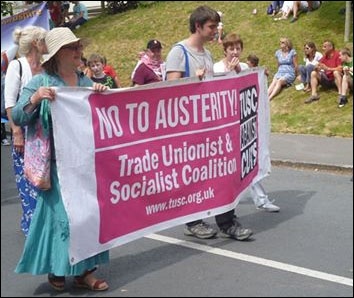 A TUSC banner on this yearâ€™s Tolpuddle Martyrsâ€™ demonstration

TUSC groups have been out supporting the Fire Brigades Union (FBU) in the action they have been forced to take to defend firefighters' pension rights.

The West Yorkshire TUSC steering committee, which includes representatives from the local FBU alongside the RMT and others, sent the following letter to members of the Labour-controlled West Yorkshire Fire Authority about the dispute:

"We are writing to you because we have serious concerns over the action of the Chief Fire Officer of West Yorkshire Fire and Rescue Service (WYFRS), Simon Pilling, in relation to the ongoing national dispute between the FBU and the government over pensions.

"Despite a statement made early on in the dispute that this was nothing to do with WYFRS and merely between the FBU and the government, there have been a number of measures aimed at breaking the strike - including during the current period of strike action paying some retained firefighters for 13 hours work for coming in for the two periods of two-hour strike action in this dispute.

"Are you aware of this and other measures, such as providing meal allowances for strike-breakers and setting up camp beds, during previous strikes? Are you aware that some fire appliances have been moved from their home station to fire service HQ for the duration of the eight days of rolling strike action, leaving stations one fire engine down for a minimum of 20 hours each of these days?

"If the Labour Party really aims to represent working class people, then this means supporting working class people such as firefighters, and their union, the FBU, in this dispute with the government. We believe that means publicly condemning the actions to break this strike and the Fire Authority, on which there is a Labour majority, ordering these measures to end.

"For our part, the Trade Unionist and Socialist Coalition has always been prepared to work with councillors who are prepared to oppose cuts and stand up to the vicious attacks of the Tory government. Your further inaction on this matter will lead firefighters and other workers to draw the conclusion that the Labour Party is continuing to move further from representing their interests and that they must stand and support their own candidates who are truly opposed to austerity and its implementation".

The best scores were in Fleetwood. In the Town Council Rossall ward by-election, on August 7th, TUSC polled 179 votes, a 19.5% share of the vote, against 394 for the winning Labour candidate and 345 for the Tories. On the same day TUSC managed an 8.4% share in Park ward, with Labour again victorious.

The TUSC national steering committee has always been clear that TUSC's election performances at this stage are still very modest, with TUSC candidates having achieved 179,000 votes since our inception in 2010. The main purpose of TUSC has been and still is to allow trade unionists and community campaigners to have a national banner to use - working class, socialist and anti-austerity - if they want to challenge the establishment parties.

But it is interesting that the Green Party, with far greater national media coverage than TUSC (and, unfortunately, councillors not prepared to resist the cuts), have contested 36 local council by-elections this year, with a not incomparable average score of 7.4%. Meanwhile, there have been 34 council by-elections in 2014 where Labour have polled double-digit votes or single-figure percentage scores, from 22 (2.9%) in Ashford, Kent back in March, to 48 (3.2%) in a Northumberland contest on July 24th. All TUSC candidates should be proud that they have been prepared to make a stand.

If local TUSC groups become aware of a pending council by-election they should certainly consider standing a candidate. And if there is no local group in your area but a by-election comes up and you're prepared to stand as a TUSC candidate, get in touch. One thing you will need to do is to get a Certificate of Authorisation from the TUSC National Nominating Officer to hand in with the nomination papers to the local council returning officer and an application form is available for this on the TUSC website at http://www.tusc.org.uk/candidates.php

Remember - if there is no trade unionist or socialist candidate standing as an alternative to the austerity parties, a cuts candidate will win unchallenged.