The Trade Unionist and Socialist Coalition (TUSC) is standing the PCS trade unionist Graham Woodhouse in the Sefton council by-election in the borough's Derby ward on 7th November.

Graham's election agent, Pete Glover, a member of the National Union of Teachers (NUT) National Executive committee for Merseyside and Cheshire (personal capacity), has issued the following appeal for support:

The Trade Unionist and Socialist Coalition (TUSC) is standing in the Nottingham city council by-elections on 7th November on a clear platform against the bedroom tax and all cuts to jobs, services and benefits.

Due to the resignation of two councillors for health reasons, there will be by-elections in the Dales and Radford & Park wards. TUSC will be contesting these as an alternative to the three main parties.

AS GEORGE Osborne announced a further 10% cut in council funding for 2015-16 in this summer's public spending review, Tory Party chairman, Grant Shapps, ridiculed councillors for the 'good work' they were doing in "cutting their cloth more intelligently".

"When we said [in 2010] we would reduce their budgets by 26% over four years, we were told councils would be going bust by this stage" but they haven't, he mocked. "I think they can do another 10%". (The Guardian, 26 June 2013) There couldn't be a clearer answer to the idea that councils should accept the cuts in the hope that things will get better in the future. The dismantling of local public services will continue in the age of austerity unless we have trade unionists, socialists and working class community campaigners as councillors who are prepared to fight back.

Shapps' claim that council services aren't really 'cash-strapped' is, of course, completely untrue. Recent research from the Leonard Cheshire Disability charity shows that six out of ten councils are now commissioning 15-minute maximum home care visits for elderly and disabled people, with the number of such visits rising by 15% since 2008. Meanwhile the number of people who got any council-funded support in their own homes fell from 958,000 in 2009-10 to 802,000 in 2011-12.

THE WARRINGTON rebel councillor Kevin Bennett, who was suspended from the Labour Party earlier this year for voting against cuts, has issued an Open Letter to Labour councillors in the North West as council budgets for 2014-15 begin to be discussed.

As Kevin says in his letter, councillors don't have to carry out the Con-Dems cuts. This February the Southampton rebel councillors, Keith Morrell and Don Thomas (now members of the TUSC national Steering Committee) presented an alternative budget to their council's budget-making meeting. Their proposals met the legal requirements of a balanced budget at least for the 2013-14 financial year - it was not a 'deficit budget'. Scandalously, however, the Labour councillors refused to even allow it to be debated (see http://www.tusc.org.uk/press180213.php ).

But the fact was they had a choice - councillors don't have to vote for cuts.

THE Trade Unionist and Socialist Coalition (TUSC) candidate Ray Smith won 27% of the vote in last Thursday's by-election for the Rossall ward of Fleetwood Town council in Lancashire.

GMB union member Ray stood to oppose the Tory-Liberal government destroying public services and led a campaign to keep the local hospital open. Ray used to be a Labour councillor (from 1995-1999) but joined TUSC because Labour was not defending working and vulnerable people.

As one of Ray's supporters said to TUSC election campaigners: "There's a lot of anxiety at the savage attack on people living in poverty, with disabilities, in fact all vulnerable people, by the Coalition government. I feel so disillusioned that Ed Miliband is not standing up for us or challenging David Cameron on his attack on the poor. Amnesty have condemned the Coalition for their attack on the disabled. Why can't Ed Miliband?"

Time for a new party to represent the trade unions, says ex-Labour MP

FOLLOWING ON from Ed Miliband's speech at the TUC on Tuesday ex-Labour MP Dave Nellist, now chairperson of the Trade Unionist and Socialist Coalition (TUSC), said: "I've spoken to TUC delegates who told me that the room was so quiet during Miliband's speech you could hear the penny dropping for many more trade union members.

"Ed Miliband has proven time and again that he does not want the Labour Party to represent organised workers within the trade union movement - and his policies don't represent the interests of the workers and their families. Only last week Labour were forced to admit that there was no grounds for the suspension of trade union members in Falkirk - but that hasn't stopped Labour pouncing on these events to further divorce the unions from the party they set up.

"The GMB cut their funding to Labour to represent the numbers who took part in the Labour leadership contest - a cut of nearly 90%. This shows that there is no enthusiasm for continuing the link with Labour.

Do we need a new party to reflect the working people of Britain? 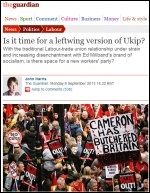 Do we need a new party to reflect the working people of Britain? As Labour prepares for a bruising clash with the unions, could a left-wing UKIP become a reality? asks The Guardian's John Harris at http://www. theguardian.com /politics/2013/ sep/09/ time-for-leftwing-ukip-labour

Ever since the general election of 2010, British politics has been in a very curious state of flux. Public mistrust in politicians runs rampant. After one inconclusive contest, the idea that neither Labour nor the Tories will have a majority of seats in 2015 is now common currency. What will happen to the Lib Dems is uncertain: they will almost certainly be thumped at the ballot box, but could once again hold the balance of power. Next year sees both the Scottish referendum on independence, and the European elections that might see Ukip finishing first. 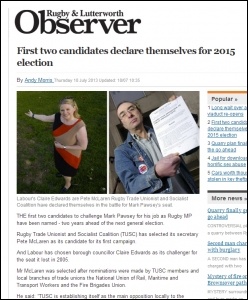 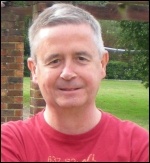 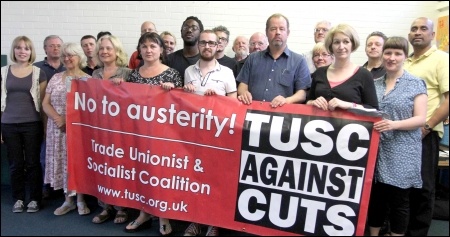 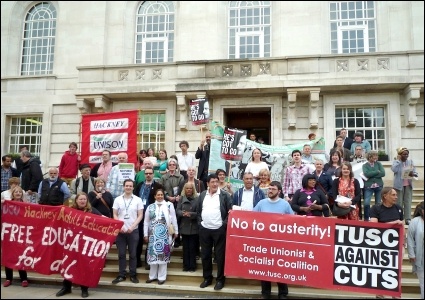