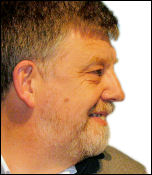 ON JANUARY 14, despite freezing conditions and snow-covered roads, seventeen people attended a meeting in Newcastle-Under-Lyme to hear TUSC national chairperson, Dave Nellist, give a talk about the importance of TUSC in this May’s forthcoming elections, and to appeal to those in attendance to consider standing as a candidate in their area.

Dave started by outlining the disillusionment of voters and the fact that there is not a ‘cigarette paper’ between the policies of the three main parties. He discussed the role that TUSC has to play in opposing these policies, and drew on several examples in history where the labour movement was successful in driving back the austerity measures of the day.  And in case anyone in the room was under the illusion that Labour would provide a remedy to these cuts, Dave informed us about the appalling record that Labour had in expelling any of their councillors who dared to vote against cuts!

In the discussion afterwards Dave addressed comments regarding economic growth and debt, stating that ‘debt’ is meaningless; as an MP from 1983-1992 he witnessed Thatcherite ministers wipe debts from public services to make them appear more profitable to private companies, and that we could solve the national debt in one fell swoop by taxing the mega rich and giving control of the state back to ordinary working-class people.

This year we already plan to stand across the whole of Staffordshire where we can, including Newcastle-under-Lyme, Stafford, Burton and Leek. We see this as a positive step in the growth of TUSC, building contacts with working-class people who more and more are identifying with socialist ideas.

At the end of the meeting at least another three people are seriously considering standing as TUSC candidates in May. This is a vast improvement from last year, when we had just two candidates standing across the borough of Newcastle-Under-Lyme.