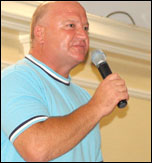 Responding to the adoption of Con-Dem policies on public sector pay by the Labour front bench at the conference in Manchester, RMT General Secretary Bob Crow today said:

“Millions of workers have had their pay frozen for years now and have seen their real standards of living decrease by 16% while boardroom pay has gone through the roof.  You would have thought that the Labour Party might do something to side with those taking a battering and against those dealing it out but you would be wrong.

“Labour and the government are now positioned like Tweedledum and Tweedledee; whichever one you vote for you end up with the same kick in the teeth for the very people that make this country tick and that is a disgrace.

“Who are those nurses, teachers and public service staff going to vote for now that Labour has made it clear they have abandoned them?

“The case for a political party rooted in the trade unions and with a clear socialist agenda is now overwhelming as Ed Miliband and Ed Balls signal their desertion of the working class and their adoption of a pro-business, pro-EU and pro-austerity programme”.

Bob Crow is a member of the TUSC national steering committee and the general secretary of the RMT union which, at its annual conference this June, agreed to formalise its relationship with TUSC.  See http://www.tusc.org.uk/news030712.php