Nominations for the 2015 elections closed on April 9th with the Trade Unionist and Socialist Coalition (TUSC) having in place 135 parliamentary candidates and 619 candidates contesting seats in the local council elections also taking place on May 7th.

Full contact details of our parliamentary candidates and their local campaigns can be found on our new election website at tusc2015.com/tuscs-general-election-challenge while there is a complete candidates' listing at www.tusc.org.uk/candidate

So it's official. TUSC will have the sixth biggest presence on the ballot papers issued in less than four weeks' time - but you wouldn't know that from any of the establishment media outlets.

The Con-Dem government has inflicted five years of savage austerity on working class people. Unfortunately there is no prospect of this changing beyond the general election, as the leadership of the Labour Party has made it clear that a Labour government would not mean an end to austerity.

The Trade Unionist and Socialist Coalition (TUSC) has been approached by the housing workers of Britain's biggest union, the Unite LE1111 branch, to endorse a Manifesto for housing produced by the branch for the forthcoming general election.

At its most recent meeting the TUSC national steering committee gave its full backing to the Manifesto (see www.housingworkers.org.uk/imgs/1424088160.pdf) which is closely based on national Unite policy. It clearly outlines the terrible and escalating housing crisis that exists in Britain today.

In the five years that this government has been in power house prices have risen by 50%, making home ownership increasingly unaffordable for the majority. In London the average age of a first time buyer is now 52! Younger people face a future of expensive private-rented, insecure and often substandard housing.

Dave Nellist puts the case for TUSC in RT interview

TUSC signs up to the Blacklist Support Group campaign

The Blacklist Support Group has been contacting parliamentary candidates to seek support for their campaign.

At its most recent meeting the Trade Unionist and Socialist Coalition (TUSC) national steering committee gave its full backing to the central demand of the campaign for a 'fully independent public inquiry into police collusion in the scandal of blacklisting'.

TUSC also supports the other demands raised by the campaign:

This week's meeting of the Trade Unionist and Socialist Coalition (TUSC) national steering committee saw the number of parliamentary candidates approved to stand for TUSC in May's general election pass the 120 mark.

At the same time, with four weeks still to go until nominations close, 387 council candidates are now in place to carry TUSC's socialist anti-austerity message in the local elections also taking place on May 7th. A full list of all the TUSC candidates agreed so far can be found at http://www.tusc.org.uk/candidate

TUSC's parliamentary candidates have been selected after a process including in most cases an attempt to discuss with the Labour Party candidate their position on a number of key issues before a final decision was made on whether to challenge them. A model letter was agreed by the TUSC national steering committee last year (see http://www.tusc.org.uk/17017/11-08-2014/general-election-planning-model-letter-to-labour-candidates-available ) which asked Labour candidates if, for example, they would support an incoming Labour government lifting the public sector pay cap, banning zero hour contracts, and immediately introducing the 'Living Wage' (Â£7.85 an hour, Â£9.15 in London) as the minimum wage?

TUSC backs 38 Degrees campaign: No to TTIP, tax the rich, and save our NHS

Across the country members of 38 Degrees have been contacting TUSC parliamentary candidates to ask their views on various questions. While local TUSC candidates have and will respond individually, the questions 38 Degrees have been asking are, in the view of the TUSC steering committee, very important. For that reason we would like to make our views as a coalition clear.

We would also appeal to all supporters of 38 Degrees and others campaigning on these issues: why not use the elections as a means to further your campaign? TUSC is a coalition which was established in order to enable people like you - trade unionists, campaigners and socialists - to stand against the pro-austerity establishment parties. This May we are aiming to have over 100 parliamentary and 1,000 council candidates standing under our umbrella.

If you would like to take part and stand as a candidate yourself check out the candidates page on the TUSC website (at http://www.tusc.org.uk/candidates.php )

The latest approvals by the TUSC national steering committee take the number of parliamentary candidates to 111. A full list of those agreed so far can be found at www.tusc.org.uk/txt/324.pdf. TUSC will have the sixth biggest presence on the ballot papers in May.

This number of candidates, with more to come, is well over the threshold for a party to receive 'fair media coverage', including a TV broadcast, of standing in one sixth of the seats up for election. Now we will see what the broadcasters mean by 'fair coverage'.

There is an alternative to austerity, rebel councillors show - so could you be a candidate?

Rebel councillors backed by the Trade Unionist and Socialist Coalition (TUSC) have shown once again that local councils could implement alternative policies to those demanded by the Westminster pro-austerity establishment parties - if only councillors were prepared to fight.

Councils really are in the frontline. The latest government cuts to funding for local authorities announced in December takes the total reduction in central government support to 37% since 2010, according to the National Audit Office.

But it is just not the case that councillors have no option but to sit in the council chamber and meekly vote for cuts to local services, especially just weeks before a general election. The fact is, the Labour and Green councillors who have voted for more cuts in the latest council budget-making meetings have chosen to back austerity.

The latest parliamentary candidates approved by the Trade Unionist and Socialist Coalition (TUSC) national steering committee have taken TUSC past the threshold to qualify for a party election broadcast in Wales in May's general election.

The broadcasting authorities' criteria for what they call 'fair media coverage', including a TV broadcast, is that a party needs to stand candidates in one sixth of the seats up for election.

With the new candidates approved, headed by the Swansea branch secretary of the RMT transport workers union, Owen Herbert (a previous member of the union's national executive), TUSC will be standing in at least eight of the 40 seats in Wales.

The Trade Unionist and Socialist Coalition (TUSC) national steering committee has today endorsed the Manifesto for Education produced by the largest teachers' union in England and Wales, the National Union of Teachers (NUT). At the same time it was confirmed that four members of the union's national executive committee (NEC) will be standing as TUSC candidates in May's elections.

The Con-Dem Government has damaged children's education. Their determination to open free schools and academies has left a fragmented and divided education system. Their attacks on pay, conditions and pensions have demoralised school staff. Excessive testing and divisive league tables have driven enjoyment out of education for staff and students alike. Children, families and school staff need these damaging policies to be reversed.

Shamefully, the Labour Party has given no indication that it would do so. David Blunkett's policy review made clear that "academies are here to stay". Shadow Education secretary Tristram Hunt has joined the Tories in blaming teachers for the problems caused by cuts, poverty and divisive education policies.

TUSC now has 72 parliamentary candidates in place, with more to come

The Trade Unionist and Socialist Coalition (TUSC) national steering committee meet on Wednesday 4th February to approve another round of parliamentary candidates. Including those agreed by the Scottish TUSC steering committee (nine so far), there are now 72 TUSC candidates in place for May's general election.

The candidates approved this week included rebel councillor Kevin Bennett (see www.tusc.org.uk/17054/29-01-2015/enough-is-enough-another-rebel-councillor-links-up-with-tusc-to-fight-austerity), who will now be standing for TUSC in the Warrington South constituency.

Also agreed as candidates were Dave Pitt, the West Midlands regional chair of the Fire Brigades Union (FBU), standing in Dudley North; and RMT members Ted Woodley, contesting Birmingham Erdington, and Richard Andrzejak, standing in Chatham and Aylesford. Richard becomes the second RMT member to contest a seat in the north Kent Medway council area. He joins the local RMT branch Young Members Officer Dan Burn who is standing in the Rochester and Strood seat of UKIP MP Mark Reckless - showing in action how the trade unions can offer a working class political challenge to the right-wing party.

This edition of Russia Today's Going Underground, published on youtube on 28 Jan 2015, covered the 'Rise of UK's Syriza' - a reference to the Trade Unionist and Socialist Coalition (TUSC). 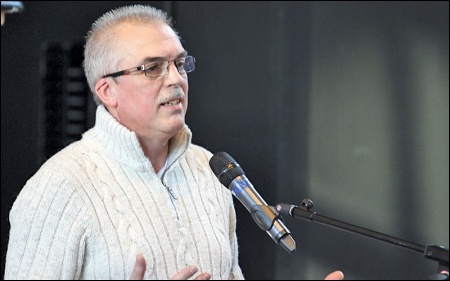 TUSC call to media (and the Greens): why not a 'minor parties' debate?

Steve Bell's Guardian cartoon on the party leaders' TV election debate row that flared up in the New Year was typically pointed. It depicted the four austerity party leaders in a line - Cameron, Farage, Clegg and Miliband - with the Greens, in a dig at Cameron's previous 'cut the green crap' comments, an unpleasant presence for them all (see gu.com/p/44q9f/tw).

Come to the 2015 TUSC conference 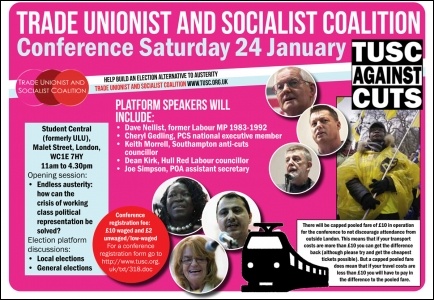 The leader of the Trade Unionist and Socialist Coalition (TUSC), former Coventry MP Dave Nellist, has today called for government intervention to save City Link jobs, saying the company should be nationalised.

The courier firm, City Link, whose headquarters are in Coventry, went into administration on Christmas Day putting thousands of jobs at risk.

Over 40 people crammed into TUSC's North West regional conference on Saturday 22 November, to map out plans for TUSC over the next year.

Trade unionists, students, community campaigners, socialists and activists from across the region contributed to the discussions.

The former Liverpool Labour city councillor Tony Mulhearn, recently selected to fight Liverpool Riverside at the general election for TUSC, introduced the first discussion. "A madness is infecting politics", said Tony, in the vacuum created by no mass voice for working-class people, and expressed in the rise of UKIP, the return of fraudster minister Laws to political prominence, while unions like the PCS face a massive assault on their basic right to organise.