Media round-up: local coverage for TUSC candidates and a letter on Russell Brand

The selection of Trade Unionist and Socialist Coalition (TUSC) prospective candidates for next year's elections has given local TUSC groups opportunities to get some media coverage in their area.

The Portsmouth News covered a 40-strong meeting, with national TUSC chair Dave Nellist in attendance, which announced the selection of candidates to contest the city's two parliamentary constituencies next May (see http://www.portsmouth.co.uk/news/local/party-picks-two-candidates-for-elections-in-may-1-6363224 ).

As part of a feature on building an alternative in the aftermath of the local and European elections (see http://www.morningstaronline.co.uk/a-ce7d-There-must-be-more-to-politics-than-this ), the Morning Star this week carried a substantial article on the Trade Unionist and Socialist Coalition's recent local elections campaign, which we republish below:

The Trade Union and Socialist Coalition (TUSC) put together what it describes as the biggest left electoral challenge to the mainstream parties since the Communist Party in 1950.

It stood 559 candidates in the local elections and received 68,000 votes. It supported Southampton rebel Labour councillors Keith Morrell and Don Thomas, who were expelled from the Labour group for voting against council cuts and presenting an alternative budget.

With hours to go until the polls open the national media boycott of the biggest left-of-Labour election challenge since world war two continues.

In the local council contests Labour and the Tories are standing in over 4,000 of the 4,216 seats up for election. The Liberal Democrats have fielded just under 3,000 candidates, UKIP over 2,000, and the Green Party 1,875. The Trade Unionist and Socialist Coalition (TUSC) has 560 candidates, 13% of the seats.

TUSC's presence on the ballot paper is not as big as the top five but it is indisputably ahead of the rest of the pack, with the next biggest parties being the BNP (106 candidates), the Christian Peoples Alliance (61), the Liberal Party (43), and the English Democrats (31). Yet TUSC's share of media coverage is no way commensurate with the number of candidates we are standing, even compared to these 'others'.

On 15 May Sheffield TUSC Walkley ward candidate Chas Lockett took part in a live debate on BBC Radio Sheffield's Rony Robinson Show. You can listen to an extract from the programme where candidates from the Lab-Con-Lib Dem parties and TUSC (and UKIP and the Greens) debate whether councils can resist the cuts.

Make a REAL difference - Vote TUSC on 22nd May 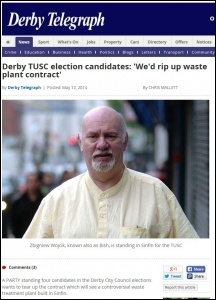 Ted Woodley ably demonstrated that Labour, Liberals and Tories are all the same when he appeared on the Adrian Goldberg radio show on 7 May 2014.

Click here to hear a couple of brief clips from the radio show in which the ideas of TUSC were discussed by the candidates of the six biggest parties. All except TUSC were in agreement that the cuts the current government demands must be carried out by local government, including UKIP and the Greens.

Ted explains clearly how Labour councils could lead a campaign to defy the government if they genuinely represented working people. TUSC, the sixth largest party contesting the elections, is the only party that clearly calls for opposition to austerity. The six largest parties contesting the local election are Labour, Tory and Liberal, UKIP, Greens and TUSC.

TUSC's local election launch on Friday May 9th was covered by the BBC, with a four minute interview with TUSC chairperson Dave Nellist on The Daily Politics - and a 20 second clip on the News at One.

TUSC election launch gets in The Independent

Under the heading, 'Crow's party to launch challenge to Labour', Andy McSmith reports on TUSC's 560-candidate challenge on May 22nd.

While he argues that TUSC is unlikely "to win more than a handful" of council seats this month and is "too small to represent a threat to Labour", he also says "that could change" in the future, as "Len McCluskey, head of the massive Unite union, has hinted it might break links with Labour" at some point. 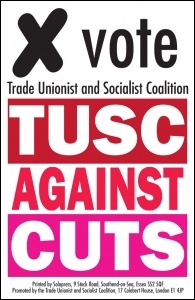 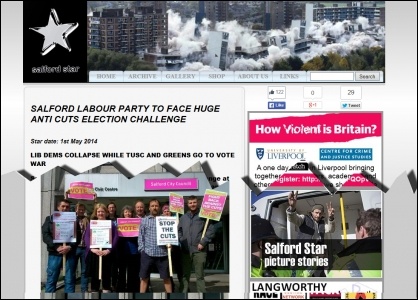 TUSC's campaign for the council elections taking place on May 22nd picked up more coverage this week in local news media.

The standout article was in the Salford Star (see http://www.salfordstar.com/article.asp?id=2253 ) which under the heading, 'Salford Labour Party to face huge anti-cuts electoral challenge', spoke of TUSC "mounting the biggest left challenge to Labour dominance, fielding candidates in nine of the twenty wards up for grabs". It also made the significant point that the Liberal Democrats, "once seen as the main opposition party in Salford", were fielding just two candidates this time.

A May Day election activity in Plymouth, where TUSC is standing candidates in all 19 of the city's wards, made the headlines in the Plymouth Herald (at http://www.plymouthherald.co.uk/Trade-unionist-coalition-hold-pre-election-rally/story-21055579-detail/story.html#ixzz30qO1e5MO ) with a good photo spread. Plymouth is another city where the Lib Dems' decline is on display, with the party contesting just four seats. 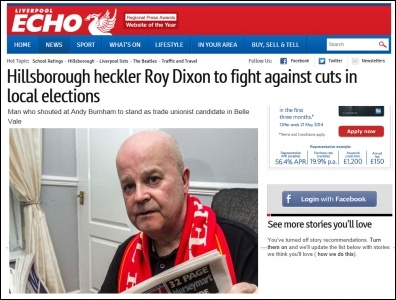 The announcement of the biggest left-of-Labour election challenge in 60 years has made the pages of local newspapers at least, since nominations closed on Friday.

Leading the way was the Liverpool Echo with the story that Roy Dixon, who they correctly describe as "the man whose heckle kick-started the process that led to the new Hillsborough inquests", is standing for the Trade Unionist and Socialist Coalition (TUSC) in the city's Belle Vale ward (see http://www.liverpoolecho.co.uk/news/liverpool-news/hillsborough-heckler-roy-dixon-stand-7038201 ).

Roy was the first person to heckle the Culture Secretary Andy Burnham at the twentieth anniversary of the Hillsborough disaster in 2009, which pushed the then Labour government into setting up a fresh review. 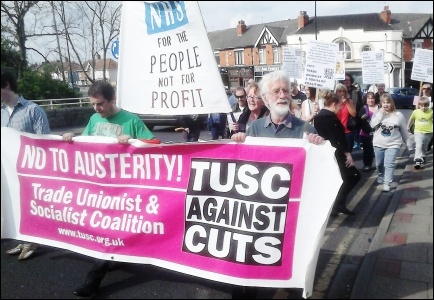 Around 30 Care UK workers were there, about a dozen of them went in to discuss with Ed Miliband. They said Miliband was supportive, didn't think Care UK should have been given the contract and was going to speak to Labour Mayor Ros Jones. But still Miliband won't publicly come out in support.

Dave said Labour, Liberal Democrats, Tories and UKIP have an "overarching agenda when it comes to austerity".