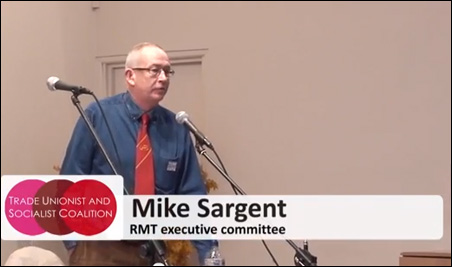 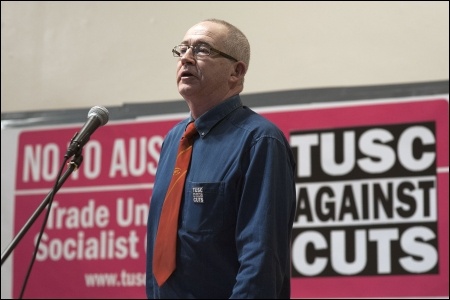 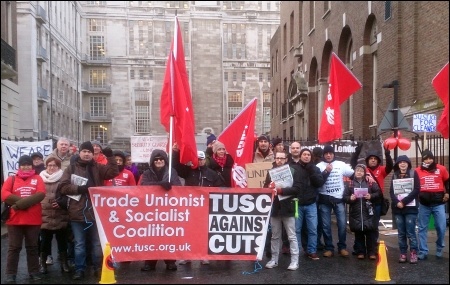 I am writing to ask for your help.

LAST WEEK'S national Trade Unionist and Socialist Coalition (TUSC) Steering Committee meeting received a full report of how TUSC candidates have performed in council by-elections they have contested during 2013.

The report is now available on the TUSC website: 2013 council by-elections

During the year TUSC candidates stood in 37 local council by-elections. Their mean average share of the vote across those seats was 5.2%. 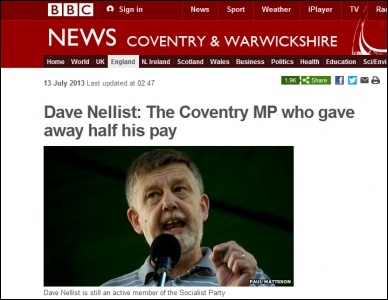 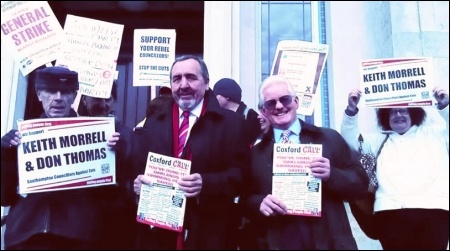 A meeting of trade unionists, socialists, anti-cuts and environmental campaigners met in Derby last week (19 November) to launch the Trade Unionist and Socialist Coalition (TUSC) and discuss plans to stand across the city in the 2014 local elections.

A second public meeting has been organised in Sinfin on Wednesday 27th November at the Sinfin Moor Social Club, Areleston Lane, Sinfin, Derby, DE24 3DH, from 7.30pm till 9pm. One of the speakers will be Dorothy Skrytek, a member of the campaign against the Sinfin incineration plant and the Friends of the Earth.

The November 19 meeting was addressed by Harry Smith, a former Labour councillor who was part of the socialist Liverpool city council between 1983-87. Along with 46 other councillors, Harry set a budget based on what the city needed to provide jobs and services and built a campaign to demand more money from the Thatcher government. Harry described that whilst other Labour councils were passing on cuts, Liverpool built houses, swimming pools, parks and created more jobs. This shows what a council can do if it is prepared to fight.

Brent mother of five Isabel Counihan Sanchez, who along with a dedicated group of supporters, has been fighting attempts to force her family out of Brent, has now decided to stand for election in next year's local elections as a Brent Trade Union and Socialist Coalition candidate.

Isabel and family were made homeless in April 2012 when their benefits were dramatically cut by Brent council and they were evicted from rented accommodation. Despite her husband Anthony working full-time as a bus driver the family were still reliant on these benefits to pay the staggering rent of Â£690.00 per week for their home in Kilburn. After being evicted they were placed in temporary accommodation in Ealing with an UN-affordable rent of Â£500.00 per week.

This put the family under tremendous pressures because the accommodation was totally unsuitable due to lack of space. Sarah, A.J, Orla & Aiden were faced with long treks to school as far as Kenton (Brent) and their youngest son, Vinny, who is Autistic was also put under tremendous pressure being completely disorientated by the changes. Added to this they were removed from their local network of family and friends. 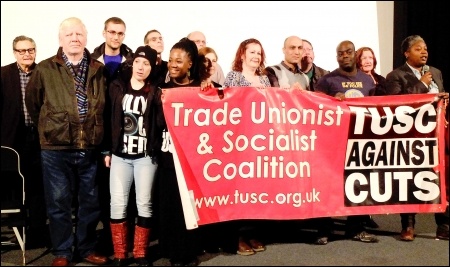 Around 100 people attended the event which included the film showing and a panel discussion, with speakers from a number of youth groups including Day-Mer Youth, Voice of Youth (Hackney), and Long Live the South Bank, and chaired by a Youth Fight For Jobs campaign representative.

Over a dozen prospective TUSC candidates for next year's local elections in Hackney and Islington were also presented to the audience (see photo).

The Trade Unionist and Socialist Coalition (TUSC) is delighted to announce that John Marston is TUSC's candidate to challenge for the Riverside council seat vacated by the deputy mayor and leading Labour Party cuts hatchet man, Paul Brant.

Unlike Paul Brant John will campaign for an end to all cuts, and for the immediate end to the evil bedroom tax. He will demand that the council declares it has no intention of penalising those who cannot afford the bedroom tax.

Nancy Taaffe, Socialist Party member and Trade Unionist and Socialist Coalition candidate said: "Boris Johnsons' increase of 25p on the London Living Wage to Â£8.55 per hour is an insult to hard working Londoners. The fact that politicians in London think that this will be enough to live on shows how completely out of touch they are with working class people. The London Living Wage can be opted in and out of by employers as they see fit. A paltry 200 employers have signed up to the living wage since it was introduced in 2005. This means that just 11,500 actually benefit from it.

"To actually work, any measures on addressing low wages have be mandatory. This means that the politicians have to stand up to big business rather than governing in their interests as they do now. We say that employers should be forced to pay a living wage rather than offered a tax break to do so. Of course small companies that genuinely need support should get it. But big companies that refuse should be taken into public ownership.