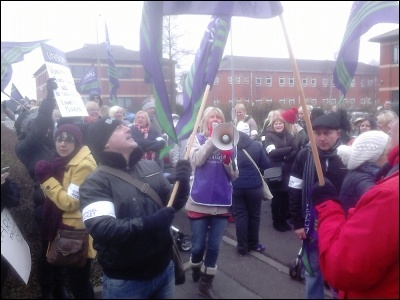 Ed Miliband, Labour Party leader and a Doncaster MP, has given no support to the striking workers. This is despite the Labour Party's promise to tackle the 'cost of living crisis' being faced by people like the Care UK workers. The lobby outside his office in Doncaster will demand that he backs the strike. Similar protests by TUSC supporters outside Care UK offices will build nationwide support for the strike.

TUSC was co-founded by the late Bob Crow when he was general secretary of the RMT transport union and involves socialist organisations and other prominent trade unionists. Some of the workers at Care UK have decided to stand under its banner in the council elections in May as part of nearly 600 candidates in England. This marks the biggest left of Labour challenge for 60 years.

The details of the protests on Thursday 24th April are:

Care UK striker and shop steward Kirstine Carbutt said in a speech during the last strike:

"At our strikers' rally we heard from a member who had been for their consultation meeting with Care UK regarding the transition payment and transfer over to new terms and conditions. At this meeting she was told to budget!

"This from a company whose idea of budgeting is to tender for a contract they knew they couldn't afford to fulfill at its current rates. They had no intention of budgeting. They knew exactly how they would make the numbers fit.

"Well I for one am sick of going to work to struggle and budget. It's our service users who will suffer.

"We have all watched as our dispute has grown and are now beginning to understand that this is part of a bigger picture about privatisation of the NHS. To other people who work in the NHS, you need to stand together with us because sooner than you think, you'll be wondering whether you should put petrol ion your car or buy food, because you've got to learn to budget!"

Care UK is one of the biggest private health corporations in Britain. It operates NHS treatment centres, walk-in centres, care homes and home care services for the elderly and people with disabilities. It is owned by a private equity company called Bridgepoint Capital who faces allegations of tax avoidance by operating loans through the Channel Islands stock exchange.

Care UK founder and chairman Mike Nash has had a 60% pay increase and now earns Â£800,000. He has donated to the Tory Party. Now Care UK is directly benefiting from cuts and privatisation as more and more council and NHS services are outsourced to the private sector that cut costs by reducing staff, pay and levels of care.